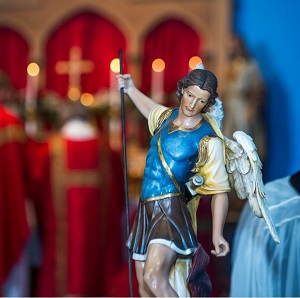 Father Peter Raleigh is the priest of Holy Innocents Catholic Church in southern Colorado, and is a staunch Second Amendment advocate and concealed handgun permit holder.

Fr. Raleigh reached out to us after being targeted by a local gun-grabbing District Attorney — for simply holding a gun!

It all started when a group of woke leftist snowflakes got “triggered” by Fr. Raleigh’s peacefully exercising his Second Amendment right to bear arms while visiting a local restaurant.

Next thing you know, Fr. Raleigh’s in handcuffs — and he was slapped with a disorderly conduct charge of displaying a gun “in a manner calculated to alarm,” despite zero evidence to support the charge.

This is exactly what NFGR’s Gun Owners’ Defense Fund exists to do — assist law-abiding gun owners who find themselves in the Left’s crosshairs.

Thanks to the support he received from RMGO and NFGR, Fr. Raleigh was able to successfully fight these bogus charges until they were dropped!

Here’s what Fr. Raleigh had to say:

“I would like to publicly acknowledge and give a Thank You to the following organizations that helped defend myself against a vicious and vile attack against myself and my Second Amendment rights:

NFGR & RMGO gave financial assistance towards my defense against a bogus charge of a firearms violation that had no merit. The case was dismissed on April 28th of this year. It was due to the generous donation of time and financial aid that I was able to overcome these false allegations. This experience has only confirmed that our Second Amendment rights are under siege. Had NFGR & RMGO not intervened, the outcome could have been different. I fully support and recommend that NFGR & RMGO be given the full support and backing by all those who love America and her freedoms.

In closing, I would like to end with a passage from Psalm 42. I pray this psalm daily at Holy Mass.

“Do me justice, O God, and fight my fight against a faithless people; Rescue me from the wicked and deceitful man.

Click here to make a tax-deductible contribution to our Gun Owners Defense Fund so we can help more gun owners like Fr. Raleigh!