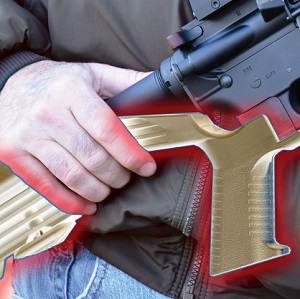 The National Foundation for Gun Rights just filed an amicus (“friend of the court”) brief in GOA v. Garland – a legal challenge to the ATF’s bump stock ban imposed in 2018.

Back in March, a three-judge panel on the Sixth Circuit Court of Appeals ruled that bump stocks were not machine guns and that executive agencies couldn’t create law:

It is not the role of the executive — particularly the unelected administrative state — to dictate to the public what is right and what is wrong.”

Unfortunately, the full court vacated this ruling and agreed to rehear the case en banc (by all the Sixth Circuit’s active judges).

NFGR’s amicus brief focuses on an overlooked aspect of the case – that forcing gun owners to discard their bump stocks (or lose them in a “tragic” boating accident) is an unconstitutional form of theft, and violates the “Takings” clause of the 5th Amendment (“nor shall private property be taken for public use, without just compensation.”).

There’s a very good reason the ATF conveniently “didn’t think about” compensating bump stock owners: it would have added a hefty $312.1 million price tag to the regulation! As our brief notes, that may well have made the government think twice about unconstitutionally banning this harmless gun accessory.

The impact of this case goes far beyond bump stocks. At stake is whether a federal agency (such as the ATF) – controlled by bureaucrats who are not accountable to the people – can unilaterally make laws, especially laws that violate the Constitution.

President Biden’s ATF is currently in the process of rolling out even more unconstitutional gun regulations targeting home-built firearms and stabilizing braces for commonly owned pistols.

These regulatory attacks will keep coming unless the federal courts stop the ATF from overstepping its constitutional role and attacking the Second Amendment, and GOA v. Garland will almost certainly end up at the U.S. Supreme Court.

To help us prepare to fight for the rights of gun owners at the U.S. Supreme Court, click here to make a tax-deductible contribution!

Meet Theresa Bragg, the Mother of Four Charged with Murder for Defending Herself
<<
Preparing to sue San Jose!
>>
Submit a Case                Donate