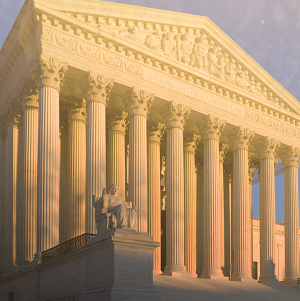 In a 6-3 decision, the Court ruled that charitable donors’ identities are protected by the First Amendment.

This case started when Kamala Harris, then Attorney General of California, began targeting charitable organizations like the National Association for Gun Rights and demanding lists of their top donors in order to fundraise in California.

No Second Amendment supporter is okay with California bureaucrats having his name and address – even on a “confidential” basis. And – as revealed in the course of the trial – California had “accidentally” published those donor lists online before, and their website URL was only one digit away from hacking.

In today’s “cancel culture” society, there is no tolerance for saying the “wrong” thing – let alone donating to the “wrong” cause. If our entire donation histories were published, how many of us would lose jobs, experience backlash from family and friends, or be subject to harassment and attacks – both online and in-person?

And unfortunately, gun rights supporters would also risk retaliation from their own state governments. Government officials can harass their constituents in a thousand ways – from denying business permits and licensing, burdensome inspections and litigation, tax audits, and the list goes on and on.

The more effective you are in holding your government accountable, the more motivation corrupt politicians have to make you pay. If lawmakers could find out who supports the organizations that make their lives miserable – say, by forcing roll call votes on Constitutional Carry bills and publishing their voting records during the election season – those supporters could become targets of legislative ire.

As our lawyers argued in a coalition amicus brief filed in this case:

“This case involves a real threat by the California government to coerce the disclosure of the identity of large donors, putting them at risk of retaliation from either the public or partisan office holders. Both mob and ruler are dangerous to dissenters, and the principle of anonymity protects Americans from both.”

The Supreme Court agreed, affirming that freedom of association is protected under the First Amendment, and that the right to associate (and donate) anonymously is a part of that.

What did the Supreme Court say?

According to this ruling, if a government demands disclosure of member info, it has to satisfy a two-fold test:

The Supreme Court ruled that California’s demand for donor info failed the second test. California claimed to need lists of top donors for the ostensible purpose of policing charitable fraud, but officials don’t actually use them or even really need them when investigating allegations of fraud.

California’s only real claim was that having donor info would improve “efficiency and efficacy.” In other words, it would just make their lives easier to have it – and the Supreme Court ruled that that’s not a good enough reason to trample the First Amendment:

“But ‘the prime objective of the First Amendment is not efficiency.’ Mere administrative convenience does not remotely ‘reflect the seriousness of the actual burden’ that the demand for Schedule Bs imposes on donors’ association rights.”

The Court went on to rule that the risk of having your personal information shared with government bureaucrats and possibly leaked to the public could have a “chilling effect” on involvement with groups like NFGR, which is an impermissible violation of the First Amendment.

For that reason, the U.S. Supreme Court ruled that California’s demand for donor information is unconstitutional.

While this is a major win, the Court did not require governments to also use the least restrictive means of achieving legitimate goals. Justice Thomas pointed this out in a concurring opinion, arguing that the Court did not go far enough to protect the First Amendment.

What does this mean for gun owners?

While the Supreme Court’s ruling in AFPF v. Bonta is a major setback for gun grabbers, it’s only one battle in the ongoing war to protect NAGR members’ privacy and freedom of association.

Leftists will try to get around this ruling and even violate it outright in desperate bids to undercut the effectiveness of groups like NAGR and NFGR. Each of these attempts must be stopped and the First Amendment enforced.

California is not the only state that has attacked the Second Amendment by targeting gun rights organizations’ donors. This is a favorite tactic of the Left, and state lawmakers and bureaucrats have been pushing legislation and policies attacking donor privacy for years.

Montana, for instance, demanded donor information in order to “allow” organizations to speak out about politicians during the election season. We challenged that policy in a case that made it all the way to the Supreme Court, only for the court to reject it for review last year, leaving the Montana anti-speech policy standing.

This means we have more work to do on this issue. Pro-Constitution Supreme Court rulings are meaningless if they aren’t enforced in the lower courts – just take a look at how often the landmark Second Amendment Heller decision is routinely violated in the states.

The National Foundation for Gun Rights will continue to fight to protect our donors’ privacy and First Amendment rights, but we can’t do it alone. To help us fight back these leftist attacks on the First and Second Amendments, click here.