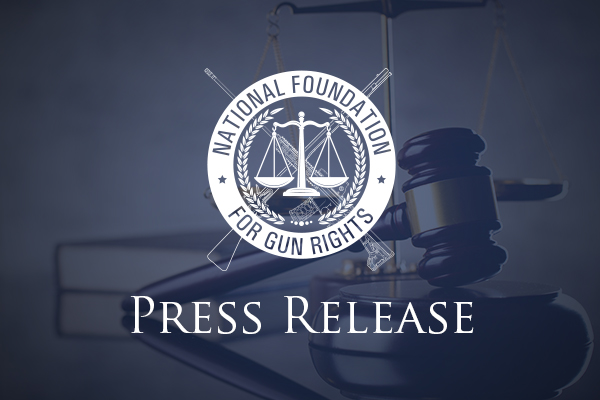 Members of both organizations and citizens of the respective cities joined as plaintiffs in the lawsuits – challenging the constitutionality of the laws and arguing that their right to keep and bear arms is being directly infringed upon. Last month, NFGR and RMGO filed lawsuits against the Town of Superior over a similar ordinance, and against Gov. Jared Polis and the State of Colorado to overturn the 2013 Colorado magazine ban.

“As an organization our mission is simple: enforce and expand pro-gun precedents issued by the courts and defend gun owners in the courts. And we’re doing just that in these lawsuits,” said Hannah Hill, Research and Policy Director for the National Foundation for Gun Rights. “Law-abiding gun owners are being disarmed throughout these cities in Colorado, and the government officials issuing the new gun control ordinances are ignoring the Heller, McDonald, and Bruen decisions – we’re here fight back.”

RMGO and NFGR are funding all three of the lawsuits, challenging their constitutionality in light of the recent Supreme Court decision NYSRPA v. Bruen.

In the Bruen case, the Supreme Court rejected “intermediate scrutiny” – the cost/benefit analysis framework that allowed lower courts to rule against the Second Amendment – and established that the standard for applying the Second Amendment is the text, history, and tradition of the right to keep and bear arms; thereby invalidating the lower court rulings’ justification for gun control.

Gun control lobbyists are pouring massive amounts of money into Colorado in an effort to help enforce these illegal gun grabs and keep them on the books.

“Everytown for Gun Control and Michael Bloomberg know that the Bruen decision eviscerated the ‘standing’ they had to put unconstitutional strangleholds on the Second Amendment rights of law-abiding Americans,” said Dudley Brown, President of the National Foundation for Gun Rights. “So they’re scrambling, spending millions of dollars to pass and uphold local-level gun control laws — hoping that ordinary citizens won’t pay attention as they demolish gun rights one town at a time. But we’re paying attention and I’m looking forward to destroying them in court.”

The full text of the three lawsuits filed be can found at the following hyperlinks: Louisville, Boulder, and Boulder County.

The National Foundation for Gun Rights is a 501(c)(3) organization that exists to expand pro-gun precedents and defend gun owners in the courts.###